I had the opportunity to use three new water stones from Naniwa , here is what I think of them: 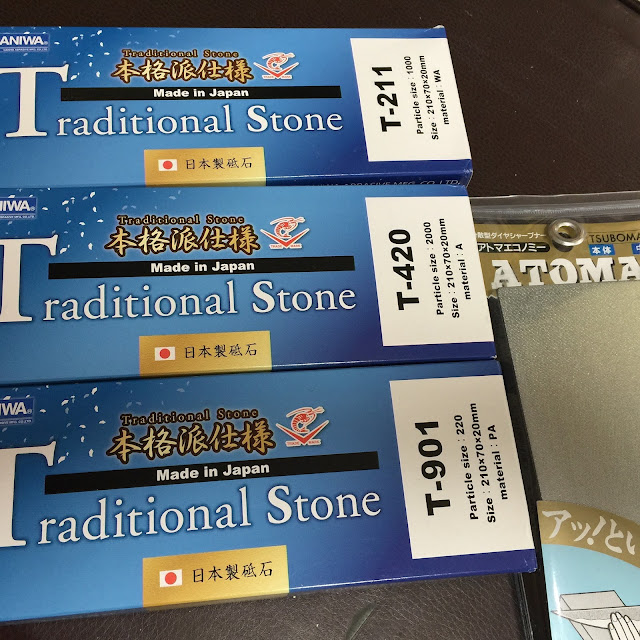 They are called Traditional stones and they will be available from Pauls Finest.

Now if you are from Canada and you want to purchase superior water stones (and some incredible knives) than I can very very highly recommend Paul. He is a pleasure to deal with and whatever you order magically appears in your mailbox in three or four days.

These stones will be for sale in a few months from Paul.  do know that they will be priced by Naniwa very nicely, a little less expensive than the Professional series.


Lets start with the 220 Traditional Stone. 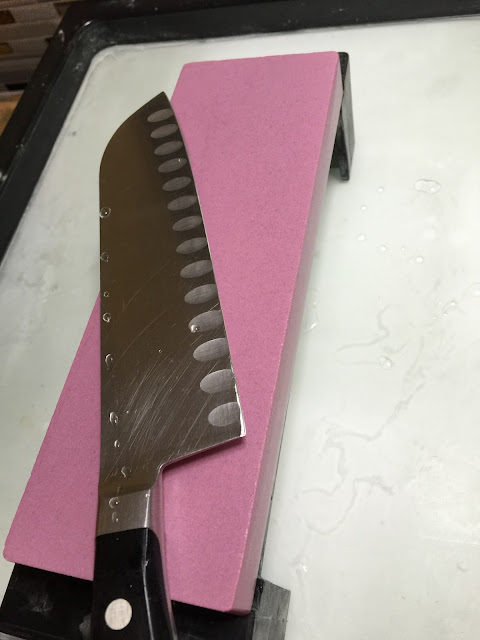 In my experience with very coarse stones, water management is a little tricky, they tend to act like a filter, so the water does not remain on the surface for too long.  I soaked this stone for an hour or so before using but I don't think you need to do that. Ten to fifteen minutes will likely suffice and it may in fact improve the water retention. I know that it did when I did that with my Nubatama 150.

Having said that, I said "typically", I didn't a surface water retention issue with this stone. It really doesn't matter anyway, you won't be spending a lot of time on it anyway. Burr removal was very quick, this knife was extremely dull and thick. You can see that the Primary Edge has moved up into the Granton Edge area where it is thick.  The stone handled this quite nicely and it doesn't feel like a very coarse stone, quite nice actually. Not as slick as the Chosera 400 but that is to be expected.

This stone is handy for chip repairs,  it is for very dull knives, thick knives and damaged knives. I don't think the average sharpener, i.e. someone who only sharpens his/her own knives will need this but it is very nice at forming a burr quickly.  So the Naniwa Professional 400 will likely be of more use to the part-time sharpener.

I really liked this one though, did the job I wanted it to and I was able to get this knife very sharp on this stone.

(I also had this one soaked but for all these stones, 10-15 minutes is all that is necessary. I did leave mine in water all night because I was using them constantly).

The first thing I noticed with this stone was the feel, the feedback is very different than the Chosera/Professional. (Let's call those C/P from now on). Where the C/P has a very silky smooth glide path that is hard not to love, this Traditional stone has an aggressive, "grabby" feel to it. This is a good thing, it felt like sharpening was taking place immediately and it was. 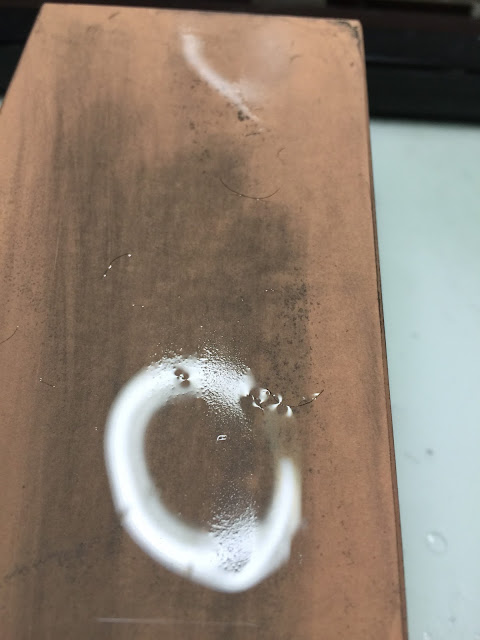 As you can see after a very short time the build up of metal from the knife on the surface as the abrasive power of the stone went to work. ( I clean this off with an Atoma 400 by the way, as I flatten it cleans, you could use a Nagura stone to clean it).  I was quite impressed with the stone, I do have to admit that.

A sharpener friend of mine ( a skilled one too) told me to expect the stone to feel like a King stone, and I agree, it did feel like that but I prefer this stone for sure.  In terms of sharpness, heck yeah, no problem getting it sharp.

As you know, pressure is huge for me, I make a big deal of manipulating pressure to squeeze everything I can from a stone so keeping that in mind, I can recommend this stone, without hesitation.  It does feel a little different than the C/P but that's Okay and if this is your first 1k stone, than it doesn't matter.  You will definitely feel like something is happening within seconds of using it.

So when these are for sale from Paul, I say go for it.

The Naniwa Aotoshi 2,000, the Green Brick of Joy is my favourite 2k stone, without doubt.
I got mine in Phoenix Knife House.  A very brilliant sharpener by the name of Corey sold it to me, he is in fact the only other sharpener that I have met in person, and he is a hell of a nice guy.  So if you are in the Phoenix area, don't hesitate to go there, it is very cool because the sharpening takes place right up front.

Naniwa may give the impression that their Traditional 2k is very similar to their Green Brick of Joy but at half the price and half the size. However the "real" GBoJ is huge so that's okay.

Keeping that comparison in mind I went to work.

As you can see they do look different so the Traditional is not just a cut down version of the Aotoshi, but that's okay, does it sharpen knives, that's what is important?

The Traditional stone feels harder than the GBrick but it got the job done very nicely. I used this stone following  the 220 and 1k Traditional and this MAC was beautifully sharp upon completion.  Now the level of polish did not seem quite the same but under magnification,  I could barely, and I mean barely make out the difference in the refinement level.

Now is it as good as the famous Green Brick of Joy?.....that depends on who is using it. Keep in mind that I have sharpened at least three thousand knives or more on my green brick so it is not simple for me to say that the Traditional is as good after only sharpening ten knives on it. However, I will say that I was impressed with it and since this will be about half the price of the Green Brick, I don't see a reason not to pick it up.  The one thing I did notice is that it built up a lot of mud as I flattened it with the Atoma 400, this is good, it gives it a very creamy feeling as you sharpen.

I finished this MAC on one side with the GB and the other with the Traditional to compare the bevels visually. I have to give the nod to the GB in terms of the polished look but again, very very close and also,  polished doesn't mean so don't think that is too important.

The bottom line is that the knife was sharp off of the Traditional 2k. (I was doing these knives for an Executive Chef so I was prepared to go back to my beloved Chosera's and Green Brick if I wasn't happy but that wasn't necessary).

Happy to be able to recommend these stones.

Believe me, I have tried a lot of stones and I don't like all of them. If you are thinking of getting into sharpening or if you already are and you're looking for some new stones to add to your obsession, I would try one of these or all of them.  I will buy some for sure. These are not "beginner" stones, I would use these, so don't worry about that. 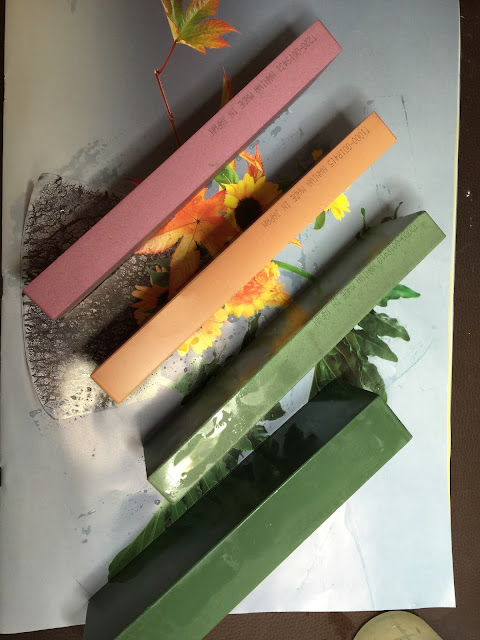 The picture above is the 220, 1k and 2k Traditional with the Green Brick on the far right. This one is considerably less thick then when I bought it, you could almost add one of those traditional stones to the green brick  to get an idea of the thickness when new, not quite but close, it really is a brick.

If you are in the USA you can of course buy these from Chef Knives to Go, another dream location for stones and knives and other nifty stuff everyone wants and Mark Richmond is also very nice to deal with.


Thanks for looking.
Peter